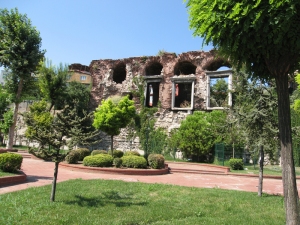 Seraglio Point in Istanbul is dominated by the magnificent, sprawling structures of two of the world’s architectural masterpieces. These are Haghia Sophia, the Byzantine Church of the Holy Wisdom, and the Ottoman Blue Mosque or Sultanahhmet Camii. They’re like prize fighters sizing one another up across the park that separates them, champions of two great civilisations and the city’s top tourist attractions today.

But I came here looking for a sorry derelict, the old Bucoleon Palace, a seaside annexe to the ancient Great Palace that was home to the emperors until the Fourth Crusaders sacked the city in 1204 and systematically looted it for the best part of the century. 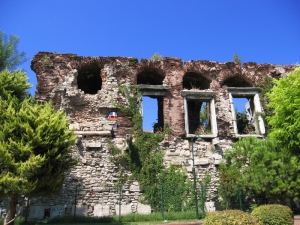 The Great Palace of the Byzantine emperors occupied the site of the present Blue Mosque and stretched all the way down to the sea. With over 500 gold-lined halls, gardens, fountains and courtyards, it was the marvel of the age and stunned contemporary visitors with its unsurpassed glamour and riches. All that remains of it are the magnificent floor and wall mosaics now protected by the Mosaic Museum next to Sultanahmet, and a wall of the Bucoleon Palace overlooking Kennedy Boulevard down on the shoreline of the Sea of Marmara.

Despite having a guide book and a map, finding the remains of the Bucoleon Palace involved a lot of sweaty walking and doubling-back in the maze of alleyways and back-streets beyond Haghia Sophia. After more than an hour of searching and asking directions my companions decided enough was enough and I left them behind at a cafe near Sultanahmet moaning about the heat and tired feet, and continued on alone.

Just as I was on the verge of giving up, I rounded a bend on the coast road and suddenly there it was. This crumbled section of old wall would be as unremarkable as any other were it not for the three huge windows still in place in a recess of the masonry. In their heyday these would have looked out across the Great Palace’s private harbour, protected by two huge lion sculptures which can now be seen in the Archaeological Museum. A few remaining corbels of a long balcony, too, can still be seen at ground level.

The magic of this place lies in the stillness, the absence of tourists and the remarkably touching way in which the distant past comes irresistibly back to life. Emperors and empresses, courtiers and visiting dignitaries once stood up there and looked out over the harbour and the Sea of Marmara beyond, or strolled chatting along the balcony in the cool evenings. It sounds clichéd, but I could almost touch them here as it’s impossible to do in the hectic and crowded atmosphere of the better-preserved Byzantine monuments of that great city.