The massive barbican broods like the wreck of a mythic hero, brought to his knees by time but still a commanding presence, keeping a watchful eye on the village that has changed out of all recognition in the seven hundred years that they have both stood here.  Beyond its battlements, the North Sea churns in winter storm and a leaden sky presses down on land and sea alike.  Seagulls wheel and dive, screeching about the battered pier, which is doing its best to keep giant breakers at bay; and one insignificant figure – myself – leans into the gale, feeling like a medieval fugitive seeking sanctuary from the spiritual storms of this life.

Shaking the rain from my coat and hat, I enter into the dark and chill interior of the gatehouse, onto cobbled stones worn smooth by countless feet, and glance apprehensively up at the vaulted ceiling receding into shadow above me.  If ever there was a prototype for Elsinore, I think, then surely this must be it.  As if on cue, a tall figure detaches itself from the gloom.  But it isn’t Hamlet’s father’s ghost doing his rounds of the battlements, but only the caretaker.  ‘Lovely weather,’ he says, rubbing his hands together cheerfully.

I wasn’t surprised to be told that Vikings once raided these shores.  The boiling seas, brooded over by rolling thunderclouds that look as if they’ve been plastered onto canvas by a mad Romantic artist, the lonely cliff-bound castles and endless Norman churches – all aspects of a harsh, rugged landscape that combine to lock this region into a time capsule, in which racial blood feuds and the clash of faiths played out their violent final act just over a millennium ago.

The English talk of the ‘North-South divide’ and it is most evident here, etched and scarred into the very rocks and people.  The southerners regard their northern neighbours as rough at the edges, to put it politely, whilst the latter dismiss theirs to the south as effeminate and untrustworthy, lacking the durability and fierce loyalties that become increasingly evident as you travel northwards.  The voices are different, too: bland estuary-English of the south shattered into regional dialects the farther north you go, reflecting historic rivalries and clan allegiances that have persisted into modern times. 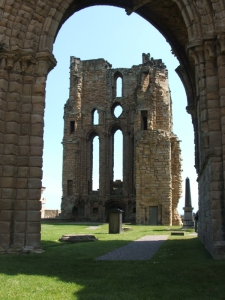 I had journeyed up here by train from London to visit the cathedral city of Durham, but I couldn’t resist making a short detour to Tynemouth’s priory and castle because of what I’d read about its Anglo-Saxon origins and connections with ancient saints and kings.  Moreover, knowing that Vikings had raided the town on more than one occasion, I wanted to try to catch an inkling of what it must have felt like to stand on these cliffs and be the first to spot the legendary marauders on the horizon.  My journey up country had taken in York the previous day, and that city’s Jorvik Viking Centre had fired my imagination and rekindled a fascination with the infamous Norsemen.  The enlightened modern reaction against the ‘unfairly biased’ contemporary press given them by monks has to be balanced against the real terror they inspired. And unlike the case with York, the Vikings who invaded the North East coast were raiders rather that settlers.  To villagers trying to get on with their already hard lives, they must have seemed like a feral pack of drunken football hooligans after a lost match, armed to the teeth and determined to take it out on everything and everyone.  A lively appreciation of their unique, fjord-bound culture of magical runes and pagan art, and their magnificent seafaring skills, belonged very much to a future generation.

To reach the gatehouse I’d skirted a wide, deep trench or dry moat, which surrounds the castle walls on their landward side.  In better weather, children now play at rolling down the grassy slopes, where once marauders bent on rape and pillage fought their way to the battlements, shields locked against a hail of missiles from the parapets and slits in the walls.  Some of these walls are Napoleonic additions, constructed to house the heavy, black canon that still stand there, when these islands stood braced against an expected French invasion two hundred years ago.  In the distance, next to the winding silver snake of the River Tyne, another reminder of that conflict stands silhouetted against the brooding skyline – the statue to Lord Collingwood, Nelson’s second-in-command at Trafalgar and a local hero.  Canons from that decisive naval victory adorn his monument and contribute to the theme of war and defiance that dominates these cliffs.

Beyond the inner gate of the barbican the scene suddenly opens up onto six acres of windswept open space, the area of the Benebale Crag, on which stand the stately ruins of a picturesque priory church, surrounded by weathered tombstones, and resembling for all the world an etching from an eighteenth century Gothic novel, probably by Mrs Radcliffe.  The driving rain greatly enhanced this effect when I was there, and I fancied that I’d been caught between two time zones and quite lost contact with my own century.  If beyond the gatehouse it was all Eric Bloodaxe, longboats and roaring canon, then inside it was more Northanger Abbey, Udolpho and Mary Shelley.  Two walls of the church are still standing; the end wall, to the east, contains three long windows; the centre one is nearly twenty feet high, richly ornamented with mouldings. Beneath the centre window at the east end is a door of excellent workmanship leading to a small chamber, supposed to have contained the tomb of St. Oswin. 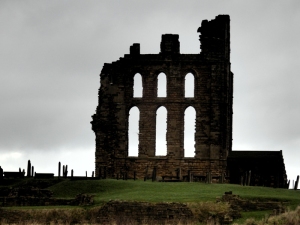 As at many other places in the region an abbey existed here early in the 7th century.  Oswald, King and Saint of Northumbria built it in stone in 637 AD.  But according to my guide, raids by the Danes on the abbey did a huge amount of damage.  In 865 the nuns of St Hilda, who had fled here from Hartlepool for refuge from another band, were all slain in a raid and the monastery burned; it was partially rebuilt but finally destroyed in 875 AD.  (Viking raids continued even into Norman times, although they must have found the Normans – themselves of Viking origin – not such easy pickings as the Anglo-Saxon monks: a Norman baron called Lord Delaval defeated a Viking chieftain called Red Eric during a raid on Tynemouth as late as the 11th century.)

The Saxon Earls of Northumberland sheltered the church within their castle on the promontory, but the monastery was soon to be restored, and the event was hastened by the discovery of the relics of the holy king and martyr Oswin.  The story goes that four hundred years had passed away since Oswin had been entombed, when one evening in the church, after the nocturnal office, a ‘radiant being of noble presence and gentle aspect’ stood before Edmund, the sacristan of the church.  ‘I am Oswin,’ said the vision; ‘seek for my grave, and restore me to the memory of men where I once bore sway.’ And then the appearance floated away and disappeared in the shadows. The sacristan’s tale was readily believed. Tosti, King Harold’s brother, was Earl of Northumberland, and his wife, the Lady Judith, came at once with the Bishop of Durham to seek for Oswin’s grave, in obedience to the heavenly mandate. They discovered it, and the relics of the saint were joyfully raised and placed on the altar. The earl commenced the erection of a monastery, attached to the church that possessed such precious relics, but didn’t complete it.

Robert de Mowbray succeeded to the earldom of Northumberland and the custody of the castle of the unfortunate Tosti, who fell at Stamford Bridge. Under his auspices the building work begun by Tosti was completed, and in 1110 the relics of St. Oswin were reinterred with much pomp and solemnity in the new monastic church.

The end of the glory days for Tynemouth Priory came, as for so many others, with Henry VIII’s Dissolution of the Monasteries.  On January 12, 1539, the monastery was given up to the Crown by Robert Blakeney, the last prior, and eighteen monks. The common seal, a beautiful work of ancient art, was broken; the plate and jewels were taken for the king. The movable property was sold, the monastic buildings dismantled, the church and the prior’s house only were preserved, the former as the parish church, the latter as a residence for the purchaser of the demesne. The six bells, whose sound had so often floated over the sea and cheered seamen’s hearts with the thought of home, were taken down and shipped to London, and the lead was torn from the roofs.

But my mind was still on the Vikings, and as I drank in the scene I noticed that the turbulent North Sea stood framed picturesquely in a high Norman arch nearby, but that the horizon beyond was lost in storm clouds.  They say that on a clear day you can see the coast of Norway from here, which is surely a folk memory from the bad old days when everyone in these parts – man, woman and child – must have spent a significant part of each day anxiously scanning that distant horizon and no doubt often imagining that they could see the rectangle of a sail.  I wondered how many false alarms panicky villagers, monks and soldiers in those blood-drenched years must have sounded, when Western civilisation hung in the balance, and the pagan gods were making their last stand against Christendom in Northern Europe.

The field of tombstones surrounding the ruins, all of them angled and worn illegibly smooth, was a reminder that Tynemouth Priory is the burial place of three notable kings: Osred and Saint Oswy of Northumbria and Malcolm Canmore, King of the Scots, whose body was interred here in 1094.

I couldn’t very well afford not to get philosophical in a place like this, on such a day, with the remains of kings as great as Beowulf for all I knew lying just beneath my feet, and the shattered skulls of Vikings, and shades of warrior-saints moving between high Gothic arches on floors that had long since crumbled to dust and blown away on the storm.  I felt a definite shiver go down my spine as I gazed up once again at the ruined walls, and remembered lines from Chesterton’s Ballad of the White Horse:

Of great limbs gone to chaos,
A great face turned to night–
Why bend above a shapeless shroud
Seeking in such archaic cloud
Sight of strong lords and light?

Where seven sunken Englands
Lie buried one by one,
Why should one idle spade, I wonder,
Shake up the dust of thanes like thunder
To smoke and choke the sun?