There’s a lot of fuss about headscarves at the moment, in Germany as well as in Turkey and elsewhere, but they’re hardly a particularly Islamic issue. I remember in the 1960s all my aunties wore them, and the streets of Newcastle were full of stout, intimidating-looking, elderly women with faces like the back end of a bus sporting beautiful high hairdos beneath colourful scarves which were tied under the chin.

The headscarf actually has a dramatic and distinguished history. The Hittites of Central Anatolia were the first to print designs on fabric using carved blocks. In many museums there are seals from about the 7th century BC made from fired clay and these would have been used along with vegetable dyes to imprint patterns on cloth.

The Hittite Empire included the Tokat province, and there has been an unbroken tradition since then of headscarf production in the region, with dozens of registered craftsmen and hundreds of apprentices still creating the traditional block print scarves in the 32 workshops of the historical Yazmacilar Han in Tokat. It’s also known appropriately as the Building of Block Print Scarf Makers and as Boyacilar Han, or the Building of Dyers.

The scarves are commonly known by various local vernacular names such as lece, cevre, yazma, cit, Yemeni, cember or hindi, and they’ve been produced in Tokat and other parts of central Anatolia especially since the mid-13th century, with their heyday in the 16th and 17th centuries, when the very finest pieces were created. They’re the cloth equivalent of Iznik tiles. 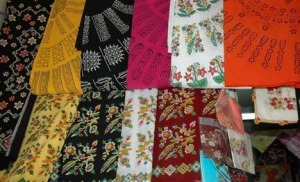 Yazmacilar Han is just one of seven or eight commercial buildings that existed there in Ottoman times. Unfortunately for die-hard traditionalists such as me, the municipality is preparing to move the old workshops to more modern premises, so now is the time to pay a visit.

Each of the workshops in Yazmacilar Han creates its scarves using more than a hundred hand-carved wooden blocks, each of them with a different motif. The biggest problem for the makers today is replacing the wooden dies when they eventually wear out.

Until about two decades ago there were still two traditional block carvers, Ali Sertoglu in Istanbul and Osman Laleci in Tokat, but since they moved on there has been nobody to supply new blocks. Osman Laleci used to carve his from lindens that grew on the Black Sea coast. There is some good news however as a local teacher has started giving courses in carving the blocks to the inmates of Tokat Prison, and the hope is that this will generate an urgently needed new supply, thereby saving the old craft from the choice of extinction or the introduction of serigraphy printing.

It’s only linden wood blocks that can give the desired quality of printing. As Osman Laleci explained in a 1986 interview, linden wood is soft enough to allow the carving of intricate designs but is also durable and absorbs the dyes well. He also said that if the blocks are well looked after they can give two centuries of use, which explains how the scarf makers of Yazmacilar Han have been able to manage without a new supply for so long.

In the blocks, the history of the craft can be traced through its various motifs, even though only a few examples of the scarves themselves have survived the passage of time. Some of the motifs have names that give a good idea of their age, such as one called ‘monogram of Abdulhamit’ which dates from the reign of Sultan Abdulhamit (1876-1909). 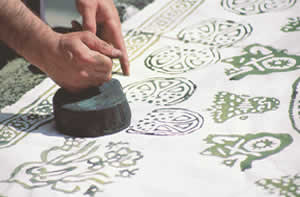 The blocks are carved with a set of small bladed knives called ‘kalemtras’, the most important of which is the ‘nakisbul’ which is used for the fine carving. But the actual printing surface is as importance as the blocks themselves. It consists of a wooden table covered with felt which is overlaid with a special fabric known as ‘alca’. Muslin scarves are stretched out and the wooden blocks are pressed directly onto the fabric. Excess dye is not removed. One of the key skills is preparation of the dyes to get just the right consistency and the desired richness of colours. In the past only vegetable dyes were used but now chemical dyes predominate, with four colours at most being used on each scarf.

Craftsmen at Yazmacilar Han nowadays produce not only traditional headscarves for women but also quilt facings, table cloths, duvet covers, pillow cases and lengths of fabric which can be used to make skirts, waistcoats and blouses. Most of the traditional motifs are floral but others represent fruits or animals, and different regions have their own characteristic colour schemes and range of motifs.

The story of the yazma doesn’t end with the finished item on a shelf, either. Having chosen a new scarf, a woman has to make an edging of needle lace or coloured beads. This is the individual finishing touch, adding a personal skill to that of the block printer. The edgings too have their own repertoire of motifs, which are continually improvised on and exchanged with friends and relatives.

Everywhere you go in Turkey you’ll find women and girls busy at their needle lace, in the streets and on doorsteps, and the finished items are works of art whose roots go back many centuries.