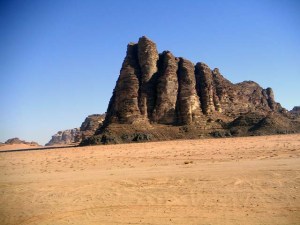 ‘Wadi Rum’, ‘The Valley of the Moon’, ‘Seven Pillars of Wisdom’ – magical and evocative names all. As Dr Jones says at one point in Raiders, ‘This is what we got into archaeology for in the first place.’

Actually it was the names of ancient Sumerian cities that originally captured my imagination and set me down the dreams and ruins route: Sippar, Ur, Warka, Uruk, Shuruppack, Nippur and, above all, Eridu – the original City of the Plain.

Babylonian and Assyrian kings were talking about these places as we talk about ancient Rome, and sometimes like Nabonidus excavating them before passing into ancient history themselves. The mind gets sucked into a dizzying tunnel of infinite regress just thinking about it.

The Seven Pillars of Wisdom rock formation in Jordan’s Wadi Rum was only named such in the 1980s, after TE Lawrence’s book of the same title. I’d thought it was the other way around, but there you go. Learn something new every day. You can get here on a day-trip from Petra.

The book is famous mainly for its memorable inscription:

I loved you, so I drew these tides of
Men into my hands
And wrote my will across the
Sky in stars
To earn you freedom, the seven
Pillared worthy house,
That your eyes might be
Shining for me
When we came

Death seemed my servant on the
Road, ’til we were near
And saw you waiting:
When you smiled and in sorrowful
Envy he outran me
And took you apart:
Into his quietness

Love, the way-weary, groped to your body,
Our brief wage
Ours for the moment
Before Earth’s soft hand explored your shape
And the blind
Worms grew fat upon
Your substance

Men prayed me that I set our work,
The inviolate house,
As a memory of you
But for fit monument I shattered it,
Unfinished: and now
The little things creep out to patch
Themselves hovels
In the marred shadow
Of your gift.”

I haven’t read it all as it’s a bit heavy. I did however pick up a book of his about Crusader castles, mainly in Syria.

Castle Kerak is one place in Jordan I have down for my next visit there, as I’ve been reading up on Raynald of Chatillon, a Crusader who gave the movement a particularly bad press. His name lives on in infamy and in Jordan to this day for his outrageous behaviour.

But just as Dante’s Inferno is a better read than his Paradiso, it’s the bastards in history who always seem to stand out. If you settle into a dentist’s waiting room and see ‘A Life of St Francis’ and ‘Attila the Hun’ on the coffee table, which one will you be most inclined to flick through?