Elazig’s history, as ancient Harput, goes back to 3000BC. Today, it’s home to a prestigious university and is a thoroughly modern town. I took a domestic flight here from Istanbul’s Sabiha Gokcen airport, crossing some fabulously wild mountainous landscapes on the way as we headed eastwards.

The Turks should seriously consider starting a wine industry in Elazig, I thought, as the soil and climate are so perfect for this that the region could easily rival the likes of Tuscany. I did even have the temerity to suggest this but was politely informed that Turks are more interested in manly beer and raki and that wine is not really taken seriously in these parts except by a few pretentious women with weak husbands who obviously can’t control them.

The restaurateur, who confidently told me this, as he poured me another raki, was however poorly informed about his own patch. Here, I soon discovered there are no fewer than 35 different varieties of grape and a wine factory was in fact established in 1994. It has a production capacity of over 6 million litres, and a wine festival was also started in 2010 in Elazig, called ‘Grape and Orcik’. There’s clearly plenty of potential for effeminate tippling in eastern Turkey.

There’s also apparently a good archaeology museum which has an excellent collection of seals of the stone stamp and cylinder variety but I had to rush and catch the rickety old minibus to Tunceli.

I shared the back seat with a young man who kept kissing his ram’s head as he steadied it by the horns. It turned out that they were both on their to the Alevi centre at the base of a holy mountain called Duzgun Baba, and that this goat he seemed so stuck on was due to have its throat slit once they got there.

The highlight of the journey for me was completely unexpected. I was crossing Lake Keban, created by the nearby dam, by car ferry and glancing to my left was astonished to see this graceful medieval castle rising from the waters. 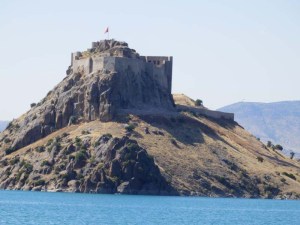 Castle Pertek used to stand on a rock overlooking the Murat River before the dam was built, but the middle of a lake is a much better setting I think. It looks positively Arthurian. Pertek Castle was built by the Seljuks with some Armenian additions and later restored by the Ottomans.

There’s a lot of history in the Tunceli region, actually. Human habitation remains go back to 5500BC, and there’s much evidence from the Hurrians and Hittites, as the central plateau region was the Hittite heartland. It was later on the eastern borders of the Roman Empire before the battle of Manzikert saw the Seljuks smash Byzantine rule in the area.

Tunceli became a city in 1087 and although the Mongols wrested it from Seljuk rule the Ottoman Fatih Sultan Mehmet defeated them in 1473 at the battle of Otlukbeli and it has remained Turkish ever since, apart from a brief Safavid period which came to an end with the battle of Caldiran in 1514.

Anyone interested in castles and battles should forget the sweltering Aegean and Mediterranean resorts and head out east. The narrow tourist strips to the west and south give a very skewered view of Turkey, whose real treasures have hardly been touched.

Even within a short drive of the major resorts like Marmaris and Izmir you come across the remains of ancient Greek cities and Seljuk castles and caravanserais with not a single poxy tourist in sight.