One of the most attractive aspects of Istanbul is the sheer number and variety of monumental fountains in the city. Each of them is a real work of art, encapsulating the spirit of the time in which it was built and constituting a surviving fragment of a lost past in an increasingly hectic and somewhat bland metropolis.

What makes Istanbul such an exciting and beautiful city for me is largely down to its unrivalled geographical location and the relics of its Imperial past, not the work of more recent regimes.

The fountains are a case in point. Istanbul had none of these until the Tulip Era of 1718 – 1730. Sultan Ahmed III at that time set a trend by ordering the construction of a new fountain in the form of a small pavilion just outside Topkapi Palace’s main gate. The most skilled metal workers, stone masons, wood carvers, tile makers, painters, gilders and calligraphers were brought in to contribute to this exquisite masterpiece.

Taps were fitted to the facades and cups of drinking water were also passed by hand to passers-by through the grilles. The celebrated poet Seyyid Vehbi added the finishing touch by penning an ode which was inscribed on the panels when the fountain was completed in 1729. The Sultan himself contributed a chronogram, a couplet encoding the fountain’s date in its numerical values:

‘Give thanks to God, drink the water, and say a prayer for Ahmed Han.’

These gorgeous little fountains don’t exactly hit you in the face as the likes of Haghia Sophia, the Blue Mosque and the stupendous Byzantine land walls do. Visitors usually pass them by without comment whilst negotiating their way towards Topkapi Palace and the other big attractions. It also doesn’t help that most of them are without information notices of any kind.

In a city which seems to be constantly changing they’re also useful as landmarks for navigation. I was down at Victoria Station a couple of days ago and took about five minutes to get completely lost. This is an area I lived in for five years in the early 1980s and knew like the back of my hand. The only building that hadn’t been knocked down was the old Apollo Theatre, crouching defiantly at the base of a monstrous glass pyramid which now dominates most of Victoria Street.

In that sense the Apollo and other survivors like it are equivalent to the marble fountains of Istanbul – amongst the very few things you can still rely on in an urban landscape that’s looking increasingly like the opening scenes of Bladerunner. 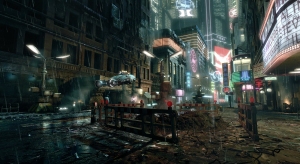