The town of Lakisu in Judah was captured by the Assyrian King Sennacherib in 701BC, the fourth year of his reign, as part of a campaign to crush rebellions that had broken out, encouraged by Egypt, following the death of Sargon II.

The siege was recorded in a series of large bas-reliefs in a room in the southwest corner of Kuyunjik, the king’s palace at Nineveh, where they were discovered by Layard and Rassam in 1853. The fact that an associated text named the town under attack as Lakisu, recognised as Biblical Lachish, spurred on work to remove the fragile slabs. Although they had suffered much damage in the destruction of the palace in 612BC the series is three-quarters complete and it constitutes a wealth of information concerning particularly military practice at the time. 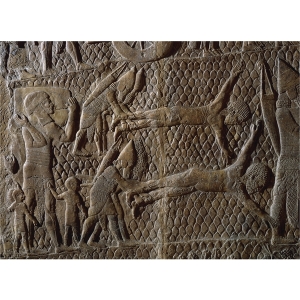 The action moved from left to right around the room, as seen in Layard’s original drawings, with the city opposite the door and Sennacherib the king seated on his throne at the centre of an end-wall. Elsewhere, we see the ramps, battering rams, assaults by infantry, executed captives hanging from walls, defenders pleading for mercy and finally the inhabitants being led off into slavery and exile.

The practice of dividing the slabs into two registers, although still adhered to, is in this series abandoned, to make full use of the potentialities of large surfaces for an evocation of the setting in which the action took place. As well as progressing around the room, action at different stages is also represented, according to the conventions of Assyrian sculpture, within a single scene. In the siege of the city, prisoners are already being led away on the right as machines and infantry storm the battlements on the left. 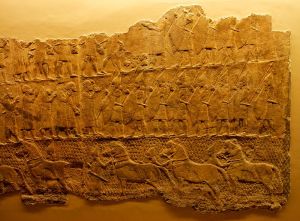 The background is no longer the neutral expanse it was at the time of Ashurnasirpal II and Shalmaneser III, and the king’s tent in the capitulation scene appears to be pitched on a small buff on the hillside as he receives prisoners and tribute. 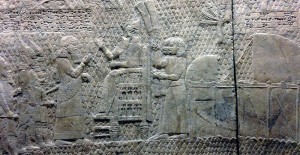 Because of the way in which a central group of officers is portrayed, a sense of depth is achieved, with other figures seeming to be in the foreground (horses) or background (vines).

It is especially interesting to note that the artist responsible appears to have been present in person at the siege. The archaeologically excavated ground plan of the city defences matches in every detail the fortifications depicted. The site where the king sat is three hundred metres away, just beyond bowshot, and we can still see the outline on the side of the tell – Tell ed-Duweir – of the earthen ramp that the Assyrians threw up against the walls. 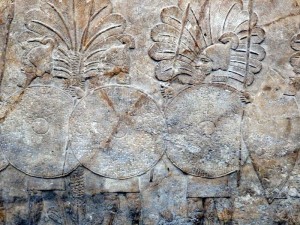 It is easy to look back at scenes like those portrayed in the Lachish reliefs and discuss them in purely artistic terms. It seems however worth remembering the reality behind what is undoubtedly a great artistic achievement. These reliefs were, after all, created throughout a period in which the violence of one small nation brought a staggering amount of suffering to countless peoples. Perhaps great conflict and great art go hand in hand, and one recalls Orson Welles’s jibe about Switzerland and cuckoo clocks.