Most of the familiar but somewhat opaque names for different parts of London have real significance if you scratch the surface a bit. The Strand, for instance, is a name derived from the old word for a water margin and refers to a strip of land that used to border the Thames. During the 16th and 17th centuries it was lined with a number of great mansions, each of whose gardens sloped down to the river.

Equally, ‘Covent Garden’ used to be a convent garden owned by Westminster Abbey. ‘Aldwych’ comes from the Saxon for old town – eald wic. The old town referred to here was a settlement given to the Danes by Alfred the Great following a battle in 886. 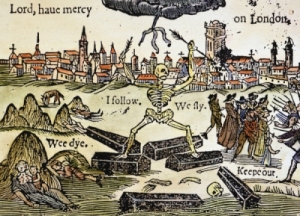 Just along from Aldwych is Drury Lane, where the Great Plague broke out in 1665. It killed one in five Londoners and you can still see its impact today in the raised levels of many churchyards – the corpses had to be packed in or thrown into communal pits.

The Theatre Royal, Drury Lane, was opened in 1812. It was the fourth theatre on the site to bear that name and it has a number of resident ghosts, the most famous being ‘The Man in Grey’. He’s dressed in the gentleman’s standard 18th century costume, including wig, riding-boots and sword, and carries a tricorn hat in his hand.

He usually appears during rehearsals although on one occasion he appeared to an audience of 150 people. Mostly, however, he’s to be seen in the upper circle at the end of row ‘D’. He floats from there up to the rear aisles and disappears through a wall near the Royal Box.

The Man in Grey is probably the only London ghost who is actually useful. Several actors at the theatre have felt invisible hands guiding them to better positions on stage during a performance. When actors adopt the superior position on their own initiative they often experience an encouraging light pat on the back.

Although the Man in Grey’s identity remains a mystery, Victorian workmen repairing a wall close to where he vanishes stumbled on a hidden closet. Inside was a dusty skeleton with a dagger in its ribcage. So that might be a clue… 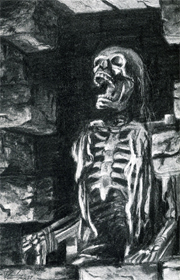