Although to the Ottomans, who failed to conquer the city in 1529, Vienna was known as the Golden Apple, to me it resembles more a huge wedding cake with lots of icing, frequently a bit too much. It sits right at the crossroads of Western and Central Europe and is positively stuffed full of museums, galleries and exhibitions, and often you really feel that you’ve slipped back in time to the days of the ruling Habsburgs. The flavour of this magnificent layer cake took many centuries to perfect, its tortuous progress traceable through the myriad interconnecting rooms of the Hofburg Palace and other architectural wonders. 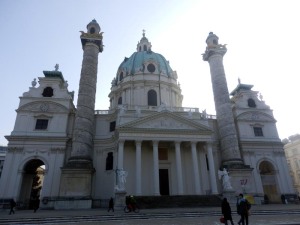 Vienna is the perfect city for leisurely strolling through, even in the -6°C in which I did it. I must say a big thanks to the guys at Just2Travel, by the way, as they did all the organising and booking, especially Berna and Murat. The Belvedere is a great hotel, within ten minutes of the Innere Stadt which is encircled by the Donau-kanal (Danube Canal) and is home to the most impressive attractions. They chose to hop on and off the tourist buses and I chose to use my legs, but I trust no offence was given. I think you experience more by walking briskly, camera at the ready for bumping into unexpected delights such as the Griensteidl Cafe next to the Hofburg. Founded in 1848, it was a favourite hangout for Vienna revolutionaries. 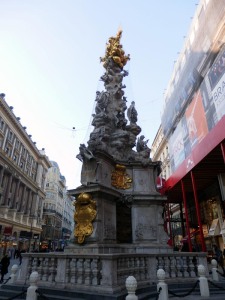 The Ringstrasse goes right around the centre of Vienna and I headed for that like an arrow to the target along Rennweg where the Belvedere is. Between there and the boutique shops and department stores of Kartner Strasse are most of the attractions, at least the ones that interested me. At the top of my list was the Stephansdom cathedral, in which Mozart was married, but equally impressive was the Karlskirche with its minaret-like columns modelled on Trajan’s Column in Rome and its vast, green dome. I was also delighted with the Hofburg Palace, centre of the Habsburg universe, through which I walked to get to two of the best museums in the world – the Kunsthistorisches and the Naturhistorisches, mirror images of each other separated by the magnificent Maria Theresa Monument.

There’s a statue to Goethe amongst many other famous creative types, including Schubert, Schiller and Strauss; and Klimt, Schubert, Mahler and Schonberg are all buried here. You can see their graves, though not that of Mozart as his was left unmarked. I mistook the opera house for a railway station, and discovered later that after it had been built the emperor himself said much the same thing to the two architects who’d spent years building it, one of whom subsequently committed suicide.

The whole of the old city positively oozes grace and elegance, and adding to the magic of the coach ride to the hotel were signposts for Graz, Budapest, Salzburg and Prague. The first of these is the capital of Styria, which features in my favourite Gothic revival novel, Carmilla by Sheridan Le Fanu. Also within a couple of hours drive is my favourite castle, Karlstein Castle in the Czech Republic, which featured as a suitably brooding backdrop in several old Hammer films.

Of course no trip to Vienna is complete without trying the Brauner coffee, which was so strong that a couple of cups gave me heart palpitations for the rest of the day, and dining on Wiener Schnitzel. This famously yummy dish originated in Byzantium, where the veal was apparently sprinkled with gold before being served, before later having more palatable golden breadcrumbs substituted. Count Radetzky, 19th century military hero of the Austrian Empire, introduced it to Vienna from his native Milan. It is classically served with potato salad, and to me it seemed a bit dry and tasteless – but who am I? Been there, done that, anyway. The Salm Brau gasthaus is one of the oldest original coaching inns in Vienna and served excellent beer right next to the hotel.

I’ve never seen so many women wearing thick fur coats and hats, either, though I suppose the severity of the weather in winter demands such skin protection. My face and feet were numb with the cold, although fortunately there was little or no condensation, otherwise it would have been impossible to get around for the ice.

Again, thank you so much to Just2Travel and I look forward to seeing you in Prague in March, when I shall certainly be joining you on the coach, and hopefully it won’t be so cold this time!

The gang’s all here