With Selcuk (pronounced Seljuk) and Ephesus both within a twenty-minute drive of my hotel – the excellent Tusan Beach Resort in Kusadasi – this summer I was pretty much spoilt for choice in terms of ancient ruins and museums. The Ephesus Museum was moved to its own building in nearby Selcuk recently and I spent a pleasant afternoon wandering around the halls in preparation for the following day’s visit to the great city itself.

The museum displays many of the most important finds from the site. The room of Artemis Ephesia is the most stunning, home to three extraordinary statues which were found buried in the upper city. They are Roman copies of a Greek goddess, the polymaste Artemis, and were displayed on the city’s coinage too. The appendages have been variously identified as bee eggs, breasts, boiled eggs, ostrich eggs and bull testicles, and the goddess Artemis herself may have been here a goddess of fertility or a virgin huntress as in her original form. The clothing of the statues was renewed every year and jewellery was also added by the priests.

The Imperial Cult Room is dominated by a colossal head and arm of the emperor Domitian, as well as seated colossal statues of the first emperor Augustus and his scheming wife Livia. All such grossly enlarged statuary was designed at the time to make the imperial family appear larger than life in every respect, and it’s certainly still very impressive today. Our own paltry little leaders seem pretty pathetic by comparison. 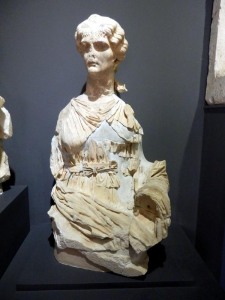 The other big attraction in Selcuk is the impressive ruins of the Church of St John. Procopius, who wrote the irreverent and scandalous Secret History in the reign of Justinian and Theodora in the 6th century, also wrote of the most important buildings of the time. He mentions that close to Ephesus there was a ruined church which had been built on the site of the Apostle John’s grave. He had according to some traditions come to Ephesus between 37 and 48AD with the Virgin Mary following the Crucifixion, when Jesus had asked John to take care of his mother.

John was certainly in Asia from 67AD, and Paul was in Ephesus between 55 and 58AD, establishing the local Christian community here. He was later exiled to Patmos under Domitian, where he wrote Revelation and died in about 98AD in the reign of Nerva, of natural causes – making him unique amongst the twelve disciples in that respect, as all the others came to very sticky ends. 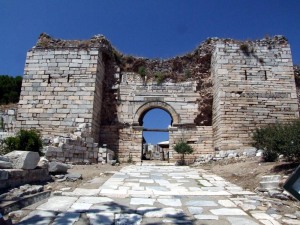 When Justinian heard about this he replaced the old church with a magnificent basilica that was, according to Procopius, the equal of any of the churches in Constantinople. The ruins are indeed still very impressive and cover a large area, and there’s an inscription to the empress Theodora on one of the columns. There’s also a Selcuk fortress on Ayasuluk Hill, just above the site, which has been settled since prehistoric times.

So, what with a fabulous archaeology museum, extensive Byzantine ruins, a castle and exotic Biblical connections, it was all in all a great day out and one to remember with pleasure when I’m ancient and decrepit, alone and living off memories like Casanova in his old age.