All the trains to everywhere on the Anatolian side of Turkey depart from this impressive Istanbul railway station, which was completed in 1908. It’s redolent of old world charm, Strangers on a Train and all that, and when I was there a couple of months ago they were filming another period costume drama set during WWI. As the likes of Mata Hari and Agatha Christie stayed at the Pera Palas Hotel on the European side just a stone’s throw away, the hotel of choice for travellers on the Orient Express, it’s easy to get sucked back into a world of spies, revolvers, deadly bouquets of roses and knives in the dark. In the balmy evenings, with the sun going down over the Bosphorus and Sea of Marmara, there’s no better spot for sitting and enjoying a sweet and strong Turkish coffee as you wait for the ferry home.

Period locomotive outside the station 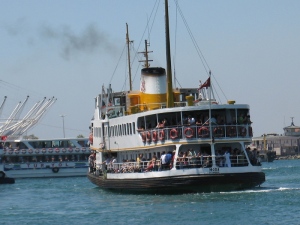