I was delighted to see the Gulf of Edremit highlighted in the movie Season of the Witch the other night. The setting bore no resemblance to the actual place I’d just come back from, but it sounded suitably exotic as a setting for a crusader battle. I did do a Google to see if crusaders ever passed through but apparently not. In the northwestern Aegean, it’s a bit off the beeline for Antioch and Palestine, and I can’t imagine that the likes of Godfrey de Bouillon and Raymond de Toulouse would have made a small detour for the appreciation of romantic sunsets and ancient ruins. The Temple of Athena overlooks the northern tip of the Gulf and has fine views across to Lesbos, and at the top of Mount Ida the Altar to Zeus is where burnt offerings were made to the gods of classical Greece. It’s mentioned in the Iliad, no less, and when you stand there in the silence today it feels quite spooky, as though something inexpressibly old and none too happy is watching you…

Temple of Athena at Assos 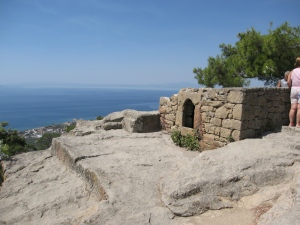 The Gulf of Edremit from Mount Ida

A nice cup of coffee and a sit down, Edremit