The Princes Islands in the Sea of Marmara – in ancient times called the Propontis – lie close to the Asian coastline of Turkey just off Istanbul, and to the north of the Gulf of Nicomedia. The islands are covered in pine forests and wild olive trees and have changed little since Byzantine times. There are several old monasteries here, where deposed emperors and courtiers were exiled after falling from grace and often blinded just to make sure they wouldn’t try doing a Napoleon. 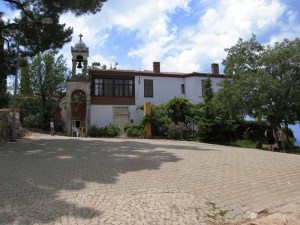 The Monastery of Saint George Koudounas was built in 963AD, when the devout Nicephorus Phokas was emperor in Constantinople. It stands at the summit of a hill on Buyuk Ada (Big Island), the largest of the Princes Islands, and contains a miraculous holy icon of St George which was a gift from the Empress. The monastery is quite famous and was mentioned in an imperial Chryssobull of the Emperor Manuel Comnenus in 1158. 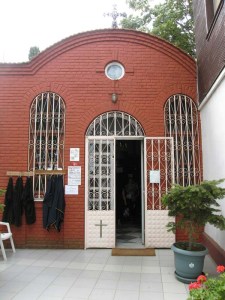 The monastery was possibly abandoned in 1204 because of the atrocities committed by the Fourth Crusade, whose leaders decided to sack Constantinople on their way to Jerusalem and ended up staying there for several decades. They trashed the city and its hinterland so badly that it never fully recovered and eventually fell to the Ottomans in 1453 – what goes around comes around. 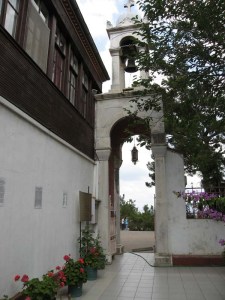 Alternatively, the monks might have packed up in 1302 when another good Christian, the Venetian Admiral Guistiniani, burnt the monasteries of the Princes Islands and plundered their treasures. The local tradition, according to the priest I talked to there, is that when Guistiniani’s fleet came into sight the monks grabbed their holy Icon of St George, which was weighed down with precious offerings, and buried it in the grounds of the monastery. Years later a shepherd on the island had a dream in which St George told him to climb a nearby hill and start digging in a particular spot where he heard ghostly bells ringing. So of course he dug and found it adorned with a string of bells and with the assistance of heavenly construction workers re-established the desecrated monastery.

The many pilgrims who still come here on St George’s Day testify to miraculous cures and epiphanies when the bells of the monastery peal out. Nice story, I think, and worth the climb.

Actually, I took a horse-drawn phaeton back down the hill (cars not allowed on the islands). I do try to climb wherever possible, though, as I’m a firm believer in a bit of suffering before an aesthetic or carnal payoff. 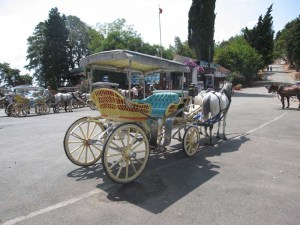