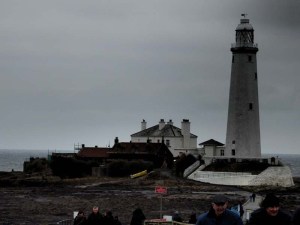 I’ve long fantasised about living in St Mary’s Lighthouse off the Northumberland coast, like Montaigne in his tower, surrounded by books and in splendid isolation. Incidentally, I hated the change to Tyne & Wear in the 1970s – it sounded so local council. Historically it has always been Northumberland and will ever remain so for me. The Vikings attacked Northumberland, not ‘Tyne & Wear’. I read nothing about ‘Tyne & Wear’ in Bede. End of rant.

The island has a rich history, like the rest of this rugged, storm-swept coastline. Nearby Tynemouth Priory was established in the 7th century and the monks used the island as a burial ground for a while.

After William the French Bastard and his thugs took over in 1066 – enslaving my ancestors, the real Brits – the Priory maintained a chapel on the island which was dedicated to St Helen and a top storey was added to this where a fire was kept burning to warn sailors of the rocks. These lights were known locally as St Mary’s Lights, so this is probably how the island got its present name. It was also known as Bate’s Island later on, after Thomas Bates, a local mine owner and a Northumberland surveyor for Elizabeth I.

In the 18th century smugglers ran brandy using a creek on the north side of the island, and they were probably responsible for murdering Anthony Mitchell, a customs surveyor, in 1722. They were supposed to have hidden their ill-gotten gains in haystacks further along the coast.

A salmon fisherman from Aberdeen, George Ewen, built a cottage on the island in 1855 to use as a base when the salmon run was on. When the salmon fishing laws became restrictive in 1860 he had to supplement his income and opened a pub called The Freemasons Arms in 1862, known as The Squire and Compass by locals. He had a falling out with a local farmer, Joseph Pattersen, a few years later and a nasty feud broke out between them. Lord Hastings, the island’s owner, had to step in and he sent in the bailiffs when Ewen refused to budge. Eventually they managed to get him out but had less success with a pig, which ran amuck for over six hours before being carted over to the mainland squealing in protest at such manhandling. John Crisp, the new tenant of the island, moved in on 10th December 1895 and ran a temperance hotel there – sounds like fun – and his family has lived on the island ever since, lucky bastards.

A troop of Russian soldiers who had stopped over on their way to fight in the Napoleonic Wars contracted cholera on the island in 1799 and were quarantined there. Only a few survived and the rest were buried near the old monks’ gravestones.

St Mary’s Island was the obvious spot to build a lighthouse because there were over 300 shipwrecks in just a few decades between Blyth and Tynemouth. The present lighthouse was intended to replace a 200 year old one at the Priory after it was realised that a gun emplacement would have to be built on the headland at Tynemouth to protect the mouth of the river. The work started in 1896 and finished in 1898, when the builder’s daughter, Miss Miller, was the first to light the beacon.

End of an Era

In 1977 the lighthouse was electrified – I remember watching this on the local news – and in 1982 it was fully automated. It was one of the last lighthouses in Britain to be modernised. This turned out to be a bit pointless because in 1984 it was decommissioned – modern navigational techniques had made it redundant. It was bought by the council on behalf of the local community. There’s no escaping progress, is there? I just wish things would slow down a bit…