North Shields, where I as a true salt-of-the-earth Geordie and proud of it come from, was founded back in 1225 by some Abbott, as is usual with most of the older settlements in these parts. It has changed a bit since I used to live there but thankfully the better pubs remain intact, such as the Wooden Doll in Hudson Street.

This was in fact the very pub where I had my first ever pint, back in the early seventies, thereby discovering that there may be something worth living for after all. Beer, as Benjamin Franklin so eloquently pointed out, ‘is proof that God loves us and wants us to be happy’. The Wooden Doll has old fashioned interior décor, by the way, and a great atmosphere. The beer and spirits are also cheap compared with London prices, which is true of practically everything so I don’t know why I bothered saying it.

Anyway, the Wooden Doll pub gets its name from the original wooden doll which used to stand outside. Down the years it has frequently gone missing or been vandalized, and the one there now is fairly new. The tradition of Wooden Dollies, as they’re called, in North Shields is very interesting and a bit convoluted. They’ve been around for two centuries and originate with a ripping yarn of pirates off the Norfolk coast, so it’s worth listening up.

In 1781 the good ship ‘Alexander and Margaret’, a collier brig that was bringing the proverbial coals to Newcastle, was attacked by John Fall, the notorious pirate, and his cut-throat crew of raffish ruffians and ne’er do wells. Captain David Bartleman and his crew of ten put up a brave fight but they were no match for the fast pirate cutter with a crew of 100 and no less than 18 four-pounders. Captain Bartleman had to pay the pirates a 400-guinea ransom before just about making it to Yarmouth port, where he died shortly afterwards.

It was the female figurehead of the doomed ship that finally found its way up the country to North Shields in 1814. It was presented to the quayside tradesmen by Alexander Bartleman and was placed by them at the Customs House Quay entrance on Liddell Street. It was vandalized in 1850 and had to be replaced by another Wooden Dolly. Local seafarers used to chip pieces off it as charms for good luck, and after years of such treatment it was so defaced that it had to be replaced by Wooden Dolly No. 3.

Dolly No. 3 was ‘procured’ (stolen) by workmen from the barque ‘Expert’ and placed at the top of Custom House Quay to celebrate the new dock that had been built at the mouth of the River Tyne. It had a bright dress of emerald green apparently, and was hugely popular with the locals. However, it suffered a fair bit of damage, such as being snapped in two by a reversing cart and having its nose slashed off by a young thug, after which a blacksmith made a new one for it out of iron. It was patched up regularly with cement but by 1900 the nose had gone again and it was in a sorry state.

At this point, the familiar Wooden Dolly No. 4 made its illustrious appearance in the form of a local fishwife bent under the weight of a creel. Its creator was May Spence and it was officially unveiled in 1902. This Dolly stayed there until 1957, when it was replaced by Dolly No. 5 but in a different location in the town.

Custom House Quay had always been the traditional home of Wooden Dollies but the fifth in the broken line of succession, which was also a representation of a fishwife, was placed bang in the middle of Northumberland Square, the heart of North Shields, where it remains. I’ve been familiar with it since I was a small child, and love it because it’s one of the very few things in my life that has remained unchanged through all these years. 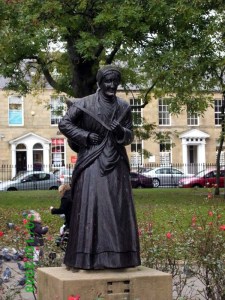 A Dolly No. 6 was set up outside the old Custom House Quay in 1992, on the same spot as Dollies 1-4. This is a fine, buxom wench dressed in red, an echo of the original figurehead, carved in solid oak by Jane and Martyn Grubb. 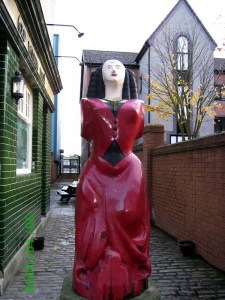 The story of the Wooden Dollies of North Shields has now come full circle with the restoration and re-dedication of Captain Bartleman’s headstone in Great Yarmouth in July 2011. The final twist is that the funding for this work came from a local family who are the distant descendants of pirates.