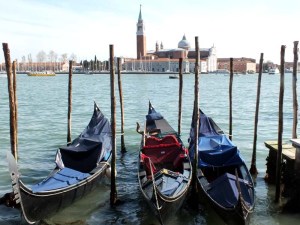 In the strange waterworld that is Venice every turn can offer a big surprise and unexpected delight. It’s perfectly true that the best way to see this city is to simply get lost in it, because as it’s an island unto itself you’re in little danger of getting lost permanently unless you fall into a canal. This is in contrast to places like London, Paris or Rome, where panic can quickly set in as you wander into grim suburbs and realise that there’s every chance of you becoming a tragic statistic if you don’t get your bearings pretty soon.

As a case in point, I had just crossed the Rialto Bridge one balmy evening on a stomach full of pizza, ice cream and beer and realised that I had lost my way to the Piazzale Roma where I was supposed to get the bus back to my hotel in Mestre. Incidentally, this suburb of Venice was described in my guidebook as being rather grotty and industrialised, where it was advisable not to venture out after dark. I found it to be perfectly pleasant, with plenty of bars, bistros and other conveniences, and actually superior to most parts of London, where I certainly wouldn’t venture out after dark. Anyway, as I was lost in any case I took a right into a dark alley and away from the river of tourists on the main street, and found myself face to face with a charming little house in Calle Michiel. The blue plaque caught my eye, where the name of Lord Byron stood out even in the gloom of those dilapidated byways. 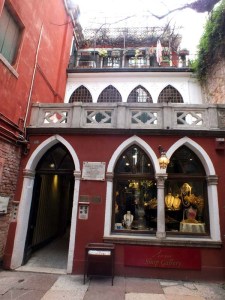 Not far from the mad bustle of St Mark’s Square, this is where Isabella Teotochi Albrizzi (born 1760) hosted one of eighteenth century Venice’s most famous salons. She was actually born in Corfu, which at that time was part of the Republic of Venice. As a lover of the arts and a writer herself she drew international cognoscenti like a magnet, and numbered among her guests Antonio Canova, Madame de Stael, Walter Scott, Goethe and Byron, as well as a host of statesmen, ambassadors and scientists, many of whom were visiting Venice as part of their Grand Tour. 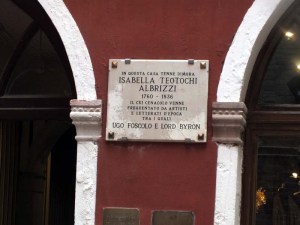 Following an unhappy marriage at the age of sixteen and its subsequent annulment, Isabella married Count Guiseppe Albrizzi in 1796, one of the richest men in Venice. He died in 1812, and at the time Byron arrived on the scene Countess Albrizzi was a widow in her fifties. Her Venetian salon – she had another near Treviso – was the setting for much poetry reading, with guests drinking punch into the early hours and generally networking. Byron made himself acquainted here with Venetian habits, many of which ended up being satirically described in his poem ‘Beppo, a Venetian Story’.

Poe, although he never visited Venice, set his tale ‘The Assignation’ there to great effect. That reminds me of Bram Stoker, whose atmospheric descriptions of the Carpathian Mountains at the beginning of Dracula were derived entirely from travel guides. Henry James also stayed here, as guest at a palazzo opposite San Giorgio Maggiore at the mouth of the Grand Canal, and Casanova escaped from a Venetian prison to write his Memoirs in later life. Perhaps it was the ghostly presence of such distinguished literary company that made me feel very much at home here.