The main Bisagra gate into Toledo always reminds me of the Hammer horror films I was addicted to as a teenager. The huge round towers and massive gateway surmounted by the double eagle of Toledo hewn out of the solid stone is a worthy backdrop to ‘Frankenstein Must be Destroyed’ or ’Taste the Blood of Dracula’.

The city itself is so redolent of the Inquisition that you can almost smell burning heretics in Zocodover Plaza, where they used to hold a regular Auto da Fe in the good old bad old days of Felipe II. He ran the country from his austere palace of Escorial just outside Madrid and agonised over how to reclaim heretical England for Catholicism.

The Monasterio de San Juan dates from those times and its walls are bizarrely decorated with leg-irons of Christian prisoners rescued from the Moors. The whole city seems stuck in a time warp, and especially in the cathedral with its gargoyles, buttresses and dark interior shimmering with gold crucifixes and tortured saints you feel like an intruder.

But modern Toledo lives off tourism, so they can’t have it both ways. 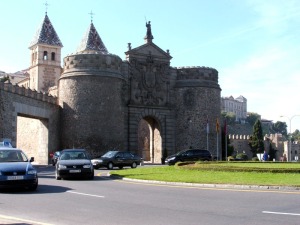 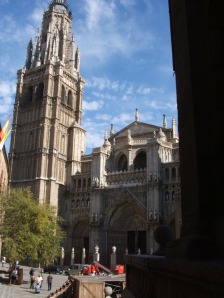 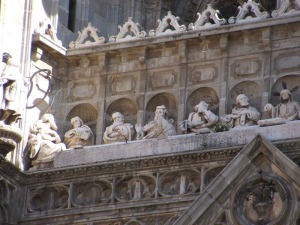 Stone saints on the cathedral facade