Lycia is a region of Turkey in the southwest of the country, roughly between the bays of Antalya and Fethiye. It is one of the most fascinating parts of Anatolia, especially in its ancient funerary architecture, which is quite distinctive and unique. Famous today for its majestic snow-capped mountain peaks that sweep right down to the impossibly blue waters of the Mediterranean, the region is packed with ancient ruins and has an incredibly romantic history if you’re into that sort of thing, which I of course most certainly am. 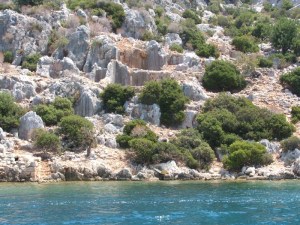 Practically all of Lycia’s ancient sites are located along its coastline and also in the valleys of the Xanthus and Arycandos rivers, which constitute the region’s heartland. I read Freya Stark’s ‘The Lycian Shore’ this summer and it reminded me, as if I needed reminding, of what a totally magical country Turkey is. England is full of snobs, America is full of guns, but Turkey is full of natural beauty and the place to head for when you need an injection of sanity and a nice cup of tea. 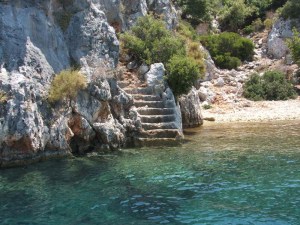 Freedom and independence were always extremely important to the Lycians and throughout their history they repeatedly took up arms against hostile powers seeking to subjugate them. They also had their own distinctive language and traditions. It’s no accident that theirs was the last Anatolian province to be incorporated into the Roman Empire. They were dragged kicking and screaming into the Pax Romana and the Romans never seemed to wonder why anyone could possibly want to resist their benign rule in such a way. As far as they were concerned they were being cruel to be kind and it was all in everyone’s best interests.

Hittite cuneiform inscriptions mention a region called Lukka which is thought to be Lycia. It was conquered by the Hittites under their great king Suppililiuma in the 14th century BC and during the battle of Kadesh they formed part of the Hittite army that opposed Egyptian forces in 1284 BC. Both sides claimed victory. But by the end of the 2nd millennium BC Lycia had become an independent state with its own army and navy. 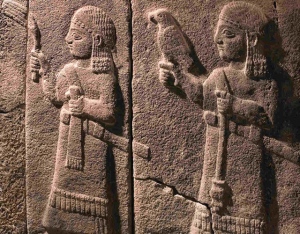 The Hittites, incidentally, are thought to be the inspiration for the ‘Amazons’ mentioned by Homer, an army of female warriors. This is probably because the Cretans had paintings of them wearing long tunics that looked like skirts. But the Hittites were no big girls’ blouses and their only recently rediscovered empire dominated Anatolia for over three centuries before sinking into the pit of history like everything else. 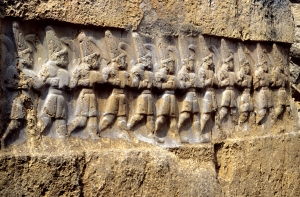 The Egyptians mention the Lycians as sea-raiders, and Herodotus says that they originally came from Crete. He says they got their name when Lycus, son of Pandion the king of Athens was expelled by his nasty brother Aegus. Herodotus notes that Lycian customs were partly Carian and partly Cretan but that they were uniquely matriarchal in lineage.

In the Iliad the Lycians are mentioned by Homer. They fought under their commanders Sarpedon and Glaucus during the Trojan War, on the Trojan side against the Achaeans.

Out with the Persians and in with the Greeks

The Persian King Harpagos conquered Lycia in 545 BC, and in 480 BC when King Xerxes assembled a massive army for the invasion of Greece the Lycians contributed fifty ships to his battle fleet.

Persian rule finally ended when Alexander the Great conquered the region and smashed their army at the Battle of Granicos soon after 333 BC when he crossed the Hellespont and began his march across Anatolia.

When Alexander died in 323 BC his generals divided the empire between them and Lycia came under the rule of Ptolemy, the new Macedonian king of Egypt. The indigenous Lycian language died out during the next century and was replaced by Greek. 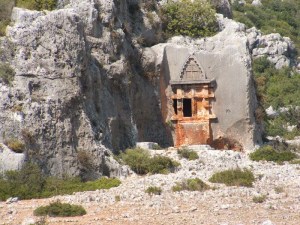 In 197 BC Antiochus III of Syria – descendent of another of Alexander’s generals who set up the Seleucid dynasty out in the East – wrested control of Lycia from Egypt shortly before he himself was defeated by the Romans at the pivotal Battle of Magnesia, which saw Anatolia become Rome’s province of Asia.

In 189 BC the region was handed over to the Rhodians, allies of the Romans, but they became independent again in 167 BC.

The Ides of March and aftermath

During the period of the Roman civil wars in the 1st century BC, the Republican generals Brutus and Cassius ravaged Lycia after they’d assassinated Julius Caesar in 44 BC. In 42 BC after the Battle of Phillipi which saw their defeat Mark Anthony was allotted Anatolia as his share of the Roman world and made Lycia fully independent. Under the Lycian League the region prospered and many private citizens of Lycia were able to amass huge fortunes. There were on average 5000 inhabitants in each of the cities making up the League and by the 4th century AD its boundaries had been extended to include Caunus, a Carian city to the northwest. 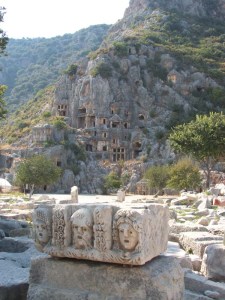 The theatre at Myra

Christians spoil the fun as usual

From the 4th to 7th centuries AD, during Byzantine times, Christian buildings were constructed across Lycia and Pagan temples vandalised by mobs of ignorant Christian fanatics. This was the fate of many magnificent temples in great centres of civilisation like Ephesus. The Lycians as a race eventually disappeared from history for this and several other reasons. In the 8th century they were invaded by tribes from the south, and around the same time there were outbreaks of plague which finished them off.

The Christians of course saw all this as the manifest will of a god who was for them really a sort of gang leader, and one moreover who’d as soon smash your face in as look at you. He was the new kid on a very old block, a bit rough and ready and eager to flex his muscles, innit? Give me Apollo or Athena any day – much more austere and dignified. 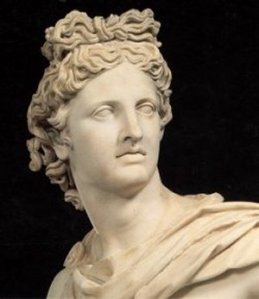