I decided to try and get into something resembling a Christmas spirit by dropping in to a couple of local fetes at the weekend. The one at Bruce Castle was a small and cosy affair. The usual stuff was on offer, all very home-made and mumsy. The Germans do these things much better.

Bruce Castle has seen it all 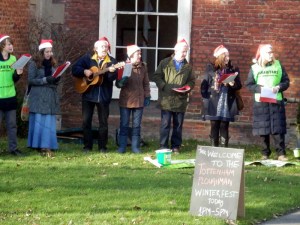 Ding dong and hey noddy no

I found a couple of old amateur oil paintings of Indian rural scenes when I moved into this house and cleared out the attic some years ago. I must take them to the Bruce Castle curator sometime. Maybe they’re by Winston Churchill, although there’s no signature on them. More likely a lowly private’s daubs whilst he was stationed there just before WWII, protecting the Empire and all that just before it went down the plughole of history.

A turbaned farmer with water buffalo in the foreground

An Indian temple in the background, looks like to me

The old tower here, incidentally, next to the 16th century manor house, was recently excavated and found to be the only Tudor water tower left in the UK. There’s as much of it below ground as there is above it, with cruciform windows and all.

It dates to about 1505. Elizabeth I and Henry VIII both visited the estate and it was once owned by Robert the Bruce of Scotland. The tower used to store water from the nearby Moselle River via an encircling pond, and was fed through sluice gates.

I may boycott Christmas this year. I’ll make porridge, put on thick socks, smash the TV and finish reading a few books with just the cat for company whilst the rest of them get swept up in the collective hysteria.

Cat’s got the right idea

The airwaves are currently being hijacked by talentless trash rushing to release any song that has the word ‘Christmas’ in it and manages to rhyme. And if they play one more Christmas song by f****** Bing Crosby or Perry Como I’ll smash the radio as well.

Happy Christmas, and ding dong merrily on something. Humbug.

“But you were always a good man of business, Jacob,’ faltered Scrooge, who now began to apply this to himself.
Business!’ cried the Ghost, wringing its hands again. “Mankind was my business; charity, mercy, forbearance, and benevolence, were, all, my business. The deals of my trade were but a drop of water in the comprehensive ocean of my business!”