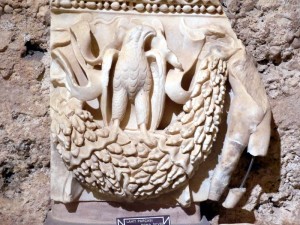 Side has become a victim of its own popularity. You reach it by driving down a 3km asphalt road off the main Antalya-Alanya coast road on Turkey’s south coast, heading eastwards. The town is located on the very edge of a small outlet jutting into the Mediterranean and was in ancient times a major sea port. It is now a bustling tourist centre, though by no means as bad as Bodrum or Izmir further west on the Aegean coastline. 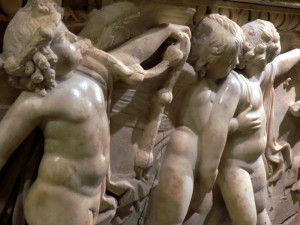 Sumptuous sarcophagus decoration in the museum

Side was settled in the 7th century BC by colonists from the West Anatolian city of Kyme. It is the most easterly settlement in Pamphylia and has been ruled by the kings of Lydia, Alexander and the Ptolemies of Egypt in its time. Despite being a centre of culture and education in the 2nd century BC – Antiochus VII of Syria was educated here – Side had a long association with piracy. Stratonicus, the Roman wit, when asked to name the most disreputable peoples replied, ‘In Pamphylia the men of Phaselis, in the whole world the men of Side’. 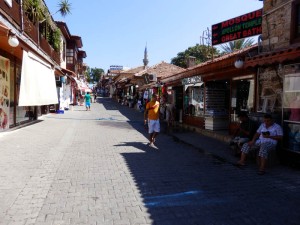 According to Strabo, the city became a slave trading centre for the region, allowing pirates to sell their human cargoes in the agora and repair their ships in the harbour. The Romans as usual knew how to deal with such situations, as Pompey the Great had shown during the last days of the Republic. This time round it was P. Servilius Vatia who was charged with clearing pirates from the region in 25BC, and Side subsequently became an imperial capital city in the 2nd century AD. Many of the great ruins we see in Side today date from this period of growth and prosperity under the Pax Romana.

A snack of grilled fish in the harbour

Side is one of my favourite cities. The main street is lined with half-timbered houses built by Muslim exiles from Crete in the early 20th century. They lead down to a picturesque harbour area and there are ruins absolutely everywhere. The remains of the Temple of Apollo are breathtakingly beautiful, outlined against the deep blue of the Mediterranean, and even the museum is located in the 5th century AD baths complex. 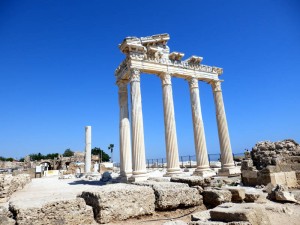 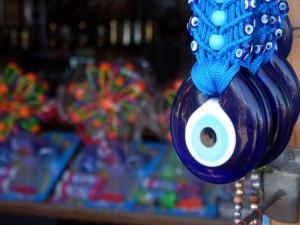