It’s always a bad idea to call anything the new one. ‘New’ castle is about a thousand years old now, and the one it presumably replaced shortly after the Norman Conquest is lost in the mists of time. Equally, Yenisehir in Bursa province to the southeast of Istanbul (one of several Yenisehirs in the country) is getting on a bit now. It was a major base for the Ottomans before they moved to Constantinople in 1453, replacing Eskisehir which is a short drive away. ‘Sehir’ (sheh heer) is city in Turkish; ‘Eski’ is old and ‘Yeni’ is new. You get the picture.

Driving around this region in the heat of August I was thrilled to discover that Eskisehir which I also passed through is the old Dorylaeum, site of a major battle in 1097 between the Franks and Turks at the start of the First Crusade. The Franks won and that of course was great for morale at least until the tide started turning against them later on in the campaign.

The only attraction of note for me in Yenisehir was the Semaki Evi Museum, built by an émigré Iranian family in the seventeenth century and recently restored. It’s a beautiful family home – although clearly for the well-heeled family – and is remarkable in being constructed entirely by hand and with not a nail in sight. William Morris would have loved the whole concept of a home that is at the same time a work of art, with everything done by master craftsmen, designers and painters. A local schoolteacher gave me a guided tour before I caught the minibus to nearby Iznik. 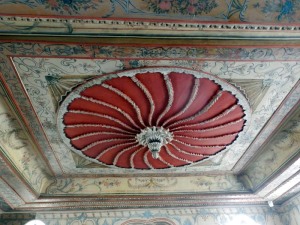 I also liked the strangely named Voyvoda Camii, or Voyvoda Mosque, in the centre of town. A Voivode was a local governor in the Balkans and the title was applied to Vlad Dracul amongst others, who ruled Transylvania semi-independently in the middle of the fifteenth century and was famous for his mass-impalements of Turkish POWs. I have no idea why a Turkish mosque should be given such an un-Islamic name, and neither did the locals, who were just surprised that I was asking such a pointless question in the first place. Any guesses?