My new Sketchers, though deliciously comfortable with their memory foam insoles and advanced air flow system, were no match for the jagged rocks that led up to the tomb of Amyntas. Fearing to lose my balance on the return trip I predictably lost it and went crashing to the ground, sending blood shooting across adjacent rocks from a deep gash in my right shin. 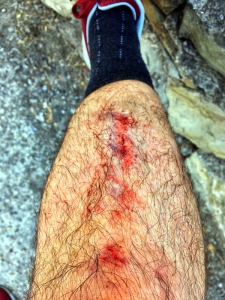 Sprawled in the dirt and flattened like a snail by my backpack, and with both hands clamped around the wound to stem the flow, I sensed the disdain of the grand old man whose final resting place loomed above me. ‘Who are these worms?’ I could almost hear him grumble to himself in a dusty voice, like Boris Karloff in The Mummy. His sombre portico to the afterlife was covered in graffiti, including appropriately enough a blood-red heart on the great marble door. One of the two Ionic columns that supported the triangular pediment had been shattered by a series of earthquakes, the most recent one in 1957 which had levelled the town. 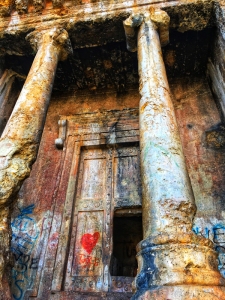 But the besieged tomb still stood largely intact. From its high vantage point the spirit of its august occupant could continue to muse and gaze across to the bay, although the smart yachts and the town itself would now look utterly alien to him. He’d certainly be deeply unimpressed at how things had turned out since the Age of Heroes. Bronze helmets and clattering shields had given place to wimps in sports shoes who couldn’t even keep their balance on a few rocks. What had the world come to?

Amyntas, son of Hermagios, as it proclaims in jagged Greek lettering on the walls of his tomb, was a 4th century BCE VIP in these parts. He was a local big wig in Telmessos, as the modern Turkish resort town of Fethiye was then called, and a pious man who had his tomb in the cliffs at the back of the town carved to resemble a temple façade, right down to the bronze nails that studded the doors.

The bottom right panel of the doorway would have been hinged to allow entry for votive offerings for many years following his death, but this was smashed by grave robbers in ancient times. Some aspects of human nature have changed little or not at all, as the modern graffiti bears eloquent witness. There are always those who strive and build and those who deface and rob, and things were no different six millennia ago.

Fethiye is the major town on the Lycian shore, the longest stretch of the Turkish Riviera, known as the Turquoise Coast, a perfect combination of natural and historic wonders. The fragmented remains of once-crowded amphitheatres, with wild grasses now sprouting between the ornate tiers of marble seats, and deserted marble thoroughfares, temples and gateways, are the only remains of the ancient settlements that flourished on these coastlines five or more millennia ago.

But this wild and unforgiving though beautiful landscape is far older than the Greeks, Persians and other peoples who have passed through or settled here. A region of mountains and forests, many rivers that rise in the high Taurus Mountains flow swiftly through deep valleys as they approach the sea and form spectacular waterfalls as the land drops away, conjuring visions of King Kong’s Skull Island. Away from the nightclubs and boutique hotels that form a thin ribbon hugging the coastline, after a few bottles of Efes Pils you wouldn’t be too surprised to spot a Brachiosaurus poking its snout from one of the interior lakes, or a pack of Velociraptors hunting in the dense pine forests that hug the precipitous mountain slopes. 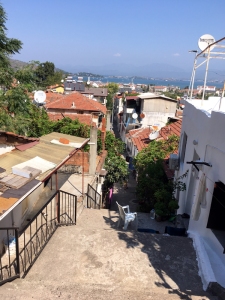 The Lycians were famous for their skills at gouging out distinctive rock-carved sepulchres in high cliff faces, of which the Tomb of Amyntas is just one example. There are many more of them further east along the coast at Myra and at nearby Dalyan, the ancient Kaunos.

I imagine all of these Greek and Lycian cities as ideal settlements, gleaming white in the sun to traders and visitors arriving by sea from other parts of the Classical world right down to late Roman times. With their city walls, temples to various gods, marketplaces and civic buildings, theatres and elaborate gateways, and their fabulous natural settings, they must have been wonderful, exhilarating places in which to live and work. Later cities took a downturn as populations grew, becoming impersonal and overbearing, sucking the life out of their citizens rather than enhancing and empowering them. I’m a Londoner. I rest my case.

Amyntas lived in the Golden Age of mankind, I thought ruefully as I nursed my injured leg. For me, it was back to the grind after this trip, and when I finally kicked the bucket I’d be cremated and shot up a chimney by the local council. He, or at least his spirit, would bask in golden sunshine for all eternity and enjoy spectacular views across the timeless Mediterranean, Home of the Heroes.

Reflecting on Odysseus spilling blood before his journey to the underworld to consult with the spirit of the dead sage Teresias, I smeared a generous amount of my own crimson essence across a nearby rock. Odysseus needed to find the best route home after being waylaid by witches, gods and monsters following the Trojan War, and only the blind spirit of Tiresias could tell him what he needed to know.

I thought of it as a votive offering – the first such in the several millennia since his state funeral, no doubt. Perhaps he’d put in a good word for me with the old gods as I continued my own journey towards elusive Ithaca.

2 responses to “Blood Rites in Telmessos”